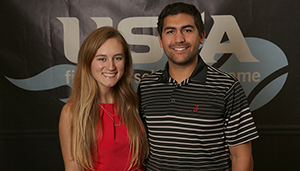 The University of Alabama’s TOC club tennis team was awarded the 2016 USTA Southern Club of the Year. The team has grown faster than any other sports club on Alabama’s campus. In 2012, there were a mere 12 members on the club; only six of them being fulltime participants. In 2016, the club has seen the biggest member turnout in its history. The club is comprised of 80 members, 38 on the competitive travel team and 42 on the recreational team. The Alabama club tennis roster is the biggest of all the sports clubs at the university. The team strives to build lasting friends, while also heavily impacting the surrounding community. Tennis is obviously a top priority for the club, but it is even more important to the officers and members to create dynamic friendships and leave a lasting impression on the club, the campus and the community.

Pictured above are Shelby Akin and Evan Enquist.