Congratulations to the 24 teams that competed in the 2020 Eastern Section Championships, and especially to Cornell, Stony Brook, Columbia and Fordham who will be going to TOC Nationals in the spring of 2020!

REGISTRATION: will be announced in August 2020.

​B-TEAM REQUESTS:  Accepted B team registrations will be announced in September.

TEAMS: Minimum of 4 players (2 men, 2 women) & maximum of 10. This year’s tournament and draw will be limited to the first 24 unique college teams. Each school may enter a maximum of one team. A second team may be requested and will be placed on a waitlist. Unique teams take precedent over second team but will be added as there is room. "B" teams get entry on a first come first serve basis.

FORMAT: World Team Tennis format consists of men’s and women’s singles, men’s and women’s doubles and mixed doubles; round robin format with at least 3 rounds of play. A match consists of five 6-game pro sets, no ad scoring, with a 9 point set tiebreak at 5 games all. Overtime and super tie-breaks will be played in this event.

AWARDS: Awards for 1st and 2nd place teams in each bracket. The top THREE teams from the Eastern Section will receive an automatic entry into the National USTA Campus Championship, receiving a stipend to help pay for travel, expenses and entry fees. 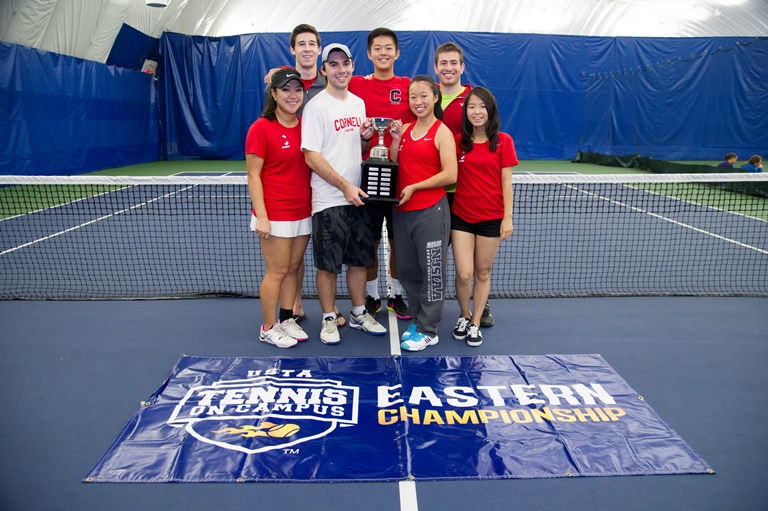 Cornell University claimed the 2019 USTA Tennis On Campus Eastern Championship. This was their 11th event title since 2006.